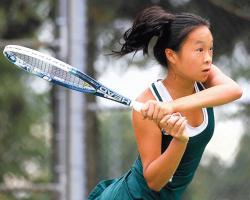 Jennifer Chen of East Brunswick High School looks to defend her Greater Middlesex Conference Tournament singles championship and continue to be a key contributor to the Bears’ girls tennis team. East Brunswick High School tennis player Jennifer Chen is a picture of motionless concentration at she stares at her opponent about to fire a serve. However, her brain is working 100 miles per hour.

“When I’m returning service, I constantly remind myself that the first ‘receive’ is critical because that’s how every point begins,” she said. “I vary them for each opponent but make it a general rule to defend the first serve and attack the second serve.”

Her mindset is essentially the same when she’s on service.

“When it comes to serving, I try to add variety and aim for specific spots in the service box to set myself up for the rest of the point,” she said.

Chen’s approach has served her well. About to enter her final year at East Brunswick, she hopes to defend her Greater Middlesex Conference (GMC) Tournament singles championship and continue to be the accomplished student that she is.

That pretty much sums up her priorities. Since she plays tennis year-round — whether it is high school or juniors — nothing less than a full commitment on both fronts is required.

“It’s meant a lot of time management and multi-tasking to complete my schoolwork and, at the same, improve my tennis game,” Chen said. “I either play a match or practice nearly every day, so I often have to do homework in my car and then strategically plan how to finish the remaining assignments in study hall. However, it’s a challenge I welcome.”

In addition to becoming the top girls tennis player in the GMC, Chen hopes to move up the junior ranks. According to Tennis Recruiting Network, a web-based group that evaluates tennis players based on wins and losses in addition to the quality of competition, Chen is considered a three-star recruit and is currently ranked seventh in New Jersey.

Her most recent tournament experience was at the 18-Under Eastern Grand Prix Aug. 8-16 in Williamsville, New York, where Chen finished 2-1 and made it to the Round of 16.

As a high school student, her unweighted GPA is 3.90 but with Honors classes she has taken, her weighted GPA is 4.42. Because she is a highly regarded athlete and student, Chen is almost certain to attend a top-shelf university. “I’m looking at several liberal arts colleges,” she said. “I have no special majors in mind at the moment.”

“Jen has become an integral part of our team’s success, both on and off the court,” said Clay, whose team finished third in the GMC Red Division standings and was 9-6 overall last year. “Her maturity and even disposition have enabled Jen to maintain her poise in tough matches, and that has resulted in comefrom behind victories. She’s also been a great mentor for our emerging players.”

In addition to winning the conference tournament singles title in 2014, Chen breezed through the regular season with an 11- 0 record, dropping one set to Pauline Kharkover of Old Bridge High School, 5- 7. Chen defeated

Chen first picked up a tennis racket when she turned 7 after her parents signed her up for a once-a-week, 30-minute group session. She also swam competitively but when the youngster decided she enjoyed tennis more, she decided to drop swimming and concentrate on improving her net game.

That commitment has included private lessons and hours of practice time alone, returning shot after shot fired by an apparatus that delivers lightning-fast balls. Chen also competes in regional tennis tournaments as often as possible to improve her rank and gain more experience playing high-caliber competition.

Much of Chen’s approach to her game comes from working with two private coaches. Mike Morris has helped her develop a reliable forehand, and Philip (Flip) Loguidice has emphasized the importance of being mentally strong during a match.

“He really helped me think more about strategy and becoming smarter,” she said.

Clay said Chen’s potential is limitless because she works so hard to improve her game.

“She has the right demeanor for tennis,” Clay said. “I’ve watched Jennifer use her focus during challenging matches and emerge with a win. There’s no doubt in my mind those experiences will lead to more success and that her senior season will be the culmination of what has been a great high school career.”