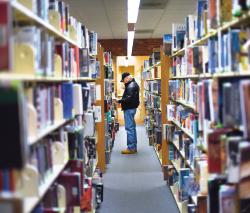 Libraries throughout central New Jersey host book clubs and discussion groups to suit a broad range of patrons’ interests. STAFF PHOTOGRAPHER ERIC SUCAR If New Jersey were hit with a zombie apocalypse, the odds for survival would not be great, according to Tyler Rousseau, emergent technologies coordinator at the Monroe Township Public Library.

“We’re in a lot of trouble,” Rousseau said. “We have way too many people — it’s just too heavily populated. Start moving west.”

Rousseau’s library group, Talking the Walking Dead, is an example of ways that libraries and independent meet-up groups in central New Jersey have challenged the concept of traditional book clubs, branching into multimedia and other 21st-century platforms.

People looking for a specific niche or who want to meet others who share their interests can take comfort knowing that there is a group out there awaiting them.

Every Monday at 4 p.m., Rousseau leads the discussion group focused on “The Walking Dead.” Fans of the wildly popular zombie apocalypse show on AMC are invited to discuss the previous night’s episode and brainstorm strategies should an apocalypse — zombie or otherwise — actually occur.

“It’s something we don’t need to take seriously at all, so to speak, but it’s also something we can have a very serious conversation about,” Rousseau said.

But for people who can’t find a group to suit their interests, one can easily be formed — as was the case with Old Bridge resident Mary Ellen Presa. “There was nothing that seemed to fit the bill of all the things I wanted,” Presa said of her search for a book club. “So I stumbled upon this site MeetUp.com, and I thought, ‘How simple would it be to create something that works for me?’ ” 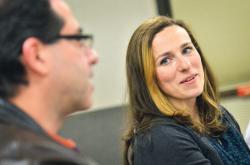 Librarian Jill D’Amico and Anthony Manicone II of East Brunswick discuss Tove Jansson’s “The Cat” during a meeting of the World Party group at the East Brunswick Public Library on Feb. 17. SCOTT FRIEDMAN

Through MeetUp.com, Presa created the Books and Movies Meetup Group for women over 35 who enjoy reading books, going to the movies and socializing. Formed in December, the group immediately attracted dozens of members, with women coming from Freehold, Red Bank, Sayreville and Edison.

“I was very nervous about doing it because I didn’t know any of them,” Presa said. “They’re all from different walks of life — one’s a therapist, one’s a teacher … it’s a really good group of women.”

Although the group is still in its early stages, Presa said her goal for the club is to read books that are going to be adapted into movies, and then see the movies upon their release.

Many other local book clubs were formed through MeetUp.com, such as those that appeal to the LGBT, African-American and science fiction communities.

The Central Jersey Sci-Fi/Fantasy Book and Movie Club meets bimonthly at various diners throughout New Jersey — including the Skylark Diner in Edison — and makes trips to the movies whenever a major sci-fi title is released.

“I think the fact that it’s science fiction just draws smarter people or more interesting people,” member Barry Schnorr said. “It draws people that have stimulating conversation or can talk about all sorts of things.”

There are two parts to the group — one focused on regular science-fiction titles and the other on graphic novels.

Many members of the group admitted that most people they know — including their friends and co-workers — simply don’t understand their commitment to science fiction.

“In real life, a lot of people, when they hear science fiction, they think ‘Star Wars’ and ‘Star Trek,’ ” said member Elizabeth Geller. “So it’s nice to be with people who see the bigger picture.”

“I tell people I’m going to get my geek on tonight,” member Jenifer Jensen said.

But for people who might not have the time to commit to a book or a movie, several groups exist that are focused solely on the short-story format.

“If you know East Brunswick, we have a very diverse community,” said librarian Jill D’Amico, who runs World Party. “We have a lot of languages spoken … so it’s kind of a nice way to celebrate that.”

According to D’Amico, the short-story format is incredibly popular internationally, and although World Party is held in English, its members, collectively, speak several languages, including Russian, Spanish, Ukrainian, Arabic, Urdu, Hindi and Burmese.

The group also has a member participating from France who joins the discussion via Skype as a way to build his English-speaking skills.

Beth Miller, a librarian at the Monmouth County Library’s Eastern Branch in Shrewsbury, said it’s important for libraries to appeal to all different kinds of patrons.

“The library wants to offer programming to everybody, so whatever we can do to encourage people to use the library, we will,” Miller said.

Miller is the organizer of the Next Chapter Book Club, a reading group for people with developmental disabilities. The group has several chapters throughout the United States, but is only now starting to be held in libraries, Miller said.

“This group is aimed for [people] out of high school, because that is the market segment that gets lost,” Miller said. “Once they’re out of high school, they lose all this great programming … so it’s very recognized that this is a group that needs more participation.”

At each meeting, the group comes together and reads aloud from various books, proving that the act of reading can be a “group activity,” Miller said.

“One mother told me, ‘When my child was born, they told me she would never read or write,’ and here she is, a young adult reading in a book club,” Miller said. “So you can’t say ‘never’ with anybody, anytime.”