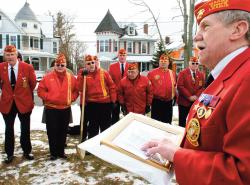 Ray Tweten, commandant of the Marine Corps League Cpl. Philip A. Reynolds Detachment, speaks at the groundbreaking ceremony for the restoration of the war memorial at Elks Point, Freehold Borough. FRANK GALIPO FREEHOLD — The war memorial at Elks Point will soon be a maintenance-free park-like setting, one befitting the heroes whose journeys on this earth are honored on the triangle of land that overlooks historic Freehold Borough.

A groundbreaking ceremony for the war memorial restoration took place at Elks Point, at the intersection of East Main and Center streets and Broadway, on Feb. 8. The location is in front of the headquarters of Freehold Elks Lodge No. 1454.

Schnurr recognized those involved with the project and said the plan will create a “maintenance-free Elks Point and dress up the main gateway to Freehold Borough and our downtown district.”

Municipal officials and representatives of the Marine Corps League Cpl. Philip A. Reynolds Detachment moved the first bits of earth to initiate the restoration.

The restoration will beautify the site, provide permanent cement crosses and a Star of David for the local men who lost their lives in service to the nation. The memorial will feature brick pavers, a wider path and an area for ceremonies.

Veterans raised funds to pay for the restoration and received financial support from the Borough Council. The war memorial has markers honoring men from the Freehold area who died in the Civil War, World War I, World War II, the Korean War, Vietnam and Iraq. There are 53 crosses — 51 for those killed in war, one for an unknown soldier and one for those lost at sea in all wars — and one Star of David at the site.

“Today is a great day and marks the beginning of the restoration of Elks Point,” said Ray Tweten, commandant of the Cpl. Philip A. Reynolds Detachment.

Tweten said Marines from the detachment have “kept fidelity” with their service to the heroes of Elks Point for 25 years.

“Marines Jim Donechie, Tim Rohan, John Bosco and Charles Butkus raised money for the project, created the design and contracted the production for the crosses and with their service, made today happen,” he said. “Their Marine brothers of the Reynolds detachment backed their efforts all the way.”

Tweten acknowledged the support of Mayor Nolan Higgins, the Borough Council, residents, organizations, veterans groups, historical societies and local historians who “added expertise to verify and collate the information from history to bring honor to our fallen heroes at Elks Point.”

Tweten presented “Distinguished Citizen” certificates to local historian Carl Steinberg, Higgins and Schnurr with thanks for their support. The other members of the council were also honored with certificates.

Higgins said attendees were there because of the efforts of local veterans groups — the Marine Corps League Cpl. Philip A. Reynolds Detachment, American Legion Post 54, Veterans of Foreign Wars Post 4374, the Disabled American Veterans Chapter 74 and the Oglensky Jackson Post 359 of the Jewish War Veterans — and the support of residents.

Higgins said Schnurr and the veterans groups shepherded the project. He thanked the Borough Council, Borough Administrator Joseph Bellina, engineers William Wentzien and Steve Kiselick, and the borough’s streets and roads department personnel, who “recognized the significance of the project.”

The mayor said recognizing the dedication and service of the community’s veterans is a longstanding Freehold Borough tradition.

“It is appropriate that this memorial, dedicated to the memory of those who served and paid the supreme sacrifice, is located at this site.

“From this vantage point, over the years of our history we would have witnessed, to our north, the Continental Army at the beginning phase of the Battle of Monmouth, and looking to Main Street, the 14th New Jersey Regiment in front of the American Hotel taking their leave from their loved ones the day before leaving for duty in the Civil War,” Higgins said.

“We can picture in our mind’s eye our servicemen and servicewomen departing our town in World War 1, World War II, the Korean War, Vietnam, Panama or the Persian Gulf,” he said.

The mayor referenced borough historian Kevin Coyne’s book “Marching Home: To War and Back with the Men of One American Town.”

“The book tells the story of our area servicemen boarding buses just a couple of blocks from here at the start of their journey to Europe and the Pacific. Visitors to our hometown will no doubt take notice of the memorial and know the sacrifices made by our residents in defense of liberty and freedom,” Higgins said.