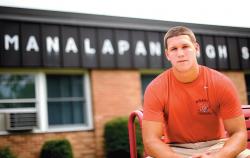 Manalapan High School graduate and multi-sport student-athlete in football and basketball Anthony Firkser is the 2013 News Transcript Senior Male Athlete of the Year. Firkser, who will continue playing both sports at Harvard University starting this fall, scored over 1,000 points with the Braves’ basketball team and holds several football records at wide receiver. STAFF PHOTOGRAPHER ERIC SUCAR Don’t ask the New Transcript’s 2013 Senior Male Athlete of the Year, Anthony Firkser, to choose between football and basketball.

The recent Manalapan High School graduate couldn’t, which is the reason he’ll continue to play both sports in college at Harvard University. The attraction of Harvard, besides its obvious academic advantages, is that it will allow the Manalapan standout to play both sports.

There’s a pretty good reason why the Braves’ standout would find it hard to pick sports, because he truly excelled at both. 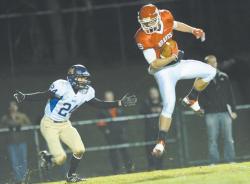 He was named the Shore Conference A North Division Offensive Player of the Year and made the all-state team. On the hardwood, he surpassed 1,000 career points during his senior season, finishing second in school history with 1,362 points. He was named by the Shore Basketball Coaches as the Co-Player of the Year in the conference.

Those individual honors are not what Firkser will take away as a memory of his four years at Manalapan. What stands out to him is that his teams won.

“To me, it’s more about the team,” he said. “What I’m proudest of is how well we played. We made the state playoffs every year [in both sports].”

It was on the gridiron where the Braves enjoyed the most success. During Firkser’s three years on the team, Manalapan went 30-6, winning three straight A North Division titles and forging a winning streak within the division at 18. After a semifinals visit in the state playoffs his sophomore year, the Braves played for the NJSIAA Central Jersey title the last two. Although they came up short both years, it’s still an accomplishment that Firkser is proud of.

Two years ago, Josh (now a junior at Wagner College who is playing club hockey) became the first 2,000-yard rusher, leading the Manalapan football team to the state playoffs for the first time in four years. It was the start of the finest three-year run in program history.

Anthony, then a sophomore, decided to go out for the football team that season just so he could play alongside his older brother. He played wide receiver and even tossed a touchdown pass to his brother on an option play.

“His year set it off,” Anthony said. “I thought what he did was amazing.”

Two years after Josh was running wild, Anthony was pretty amazing himself. He helped the Braves forge their first undefeated regular season and make it all the way to the NJSIAA Central Jersey Group V finals for the second straight year. The team established a new single-season record for wins in a season (11) and points scored (414).

The younger Firkser would pull down 43 passes for 996 yards, averaging an unheard-of 23.2 yards per catch. He caught nine touchdown passes, including two in the Central Jersey finals.

One of his catches, a juggling one-hander that he pulled in while splitting two Freehold Township High School defenders and breaking a tackle that he turned into a 67-yard touchdown, was named the Top Play of the Week by Max Preps, making the Braves’ receiver a video star.

Saeed Blacknall (a senior this fall) and he were the Shore Conference’s best receiving combination. The way they complemented each other’s games and their unselfishness made them that much more dangerous. Firkser holds Manalapan records for most career receiving yards (2,118), receptions (110) and touchdown catches (19).

Braves head football coach Ed Gurrieri said that what he liked most about his wide receiver was that “he loved to compete. Anytime in a big game [and] in a big moment, he found a way to raise his game.”

The head coach added that when the Braves needed to make a play, they called his number. He was outstanding in the Central Jersey finals with five catches for 113 yards and those two touchdowns.

Although the original idea was to start playing football to play with his brother, Firkser quickly fell in love with it. He still remembers that first Friday night game at home running onto the field in front of the Braves’ faithful.

“It was ‘Friday Nigh Lights’ — a different experience,” said Firkser.

It hooked him, and much to his surprise, he caught on to the sport rather quickly.

“I had played basketball all my life, but only one year of football in Pop Warner,” he said.

The career records he set during his career are more than ample proof that he not only mastered football, but he became one of Manalapan’s greatest players.

Beyond catching touchdown passes and making big plays, there was something else about football that drew Firkser to the sport. He began to appreciate the “camaraderie and team aspect” of football. Of course, Firkser’s attributes go beyond the competitive field, according to Gurrieri. “He’s an outstanding young man in everything,” the coach said. “He’s very mature and has a great work ethic.”

Braves head basketball coach Rick Garretson knows that he is losing more than Firkser’s 21.3 points a game. He’s losing something far more valuable — his floor general. The point guard was the top playmaker in the Shore this past winter, averaging 7.6 assists a game.

“There’s not a kid with more character,” Garretson said of his point guard. “He’s one of the most coachable players I’ve had in my 20 years.

“He put the team before himself,” the head coach continued. “He’s a dream for a coach. He makes everyone around him better.”

Firkser saw his role this past season as being one in which he had to get everyone involved more, and he worked on that during the offseason with great success.

“I worked on helping my teammates out,” he said. “I knew I needed to be more of a distributor.”

The result was Manalapan having one of the most prolific 3-point shooting teams, because Firkser would drive and penetrate the paint, and dish the ball out to an open teammate. He also possessed a pretty far stepback 3-pointer that he used to deliver a dagger to the opposition.

Whether it was making the big catch on the gridiron or making the big shot on the court, Firkser welcomed the pressure. That is what made him such a special player for his teams.

Firkser has already had an eventful postscholastic career. This summer he was in Israel competing on the Team USA Junior basketball team that captured the gold medal at the Maccabiah Games.

“It was a totally new experience for me,” Firkser said. “It was my first time away from home.

“It made me appreciate my heritage,” he added.

The basketball competition was held in Tel Aviv.

The Games were also a good preparation for college, because he played against older players in international competition. The Maccabiah Games are the Jewish Olympics, attracting participants from 77 nations competing in 38 sports.

“Playing against better competition makes you better,” he said.

Next up for the New Transcript’s Athlete of the Year is Harvard and Ivy League Football on Saturday afternoons.