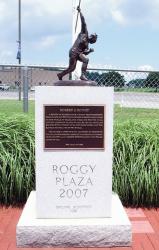 The Bob Roggy Plaza at the Holmdel High School football field honors the memory of late Holmdel graduate Bob Roggy, who held the American record in the javelin throw. I t was as if Scott Cannon had pulled Excalibur out of a stone. He was in possession of something very special — javelins used by the late Bob Roggy, the Holmdel High School graduate who competed on the world stage in the javelin and was once ranked No. 1 in the world.

After the death of Roggy’s parents, Cannon, who was a neighbor, helped the family get their house ready for sale. While going through the attic, he discovered five of Roggy’s javelins, much to his surprise and delight. As a friend of Roggy’s, the family gave the spears to Cannon.

After Roggy died two days shy of his 30th birthday in a 1986 accident in which he fell off the back of a pickup truck, a scholarship fund was set up in his name at Holmdel. Each year, Holmdel’s best male and female track athletes receive Bob Roggy scholarships. Cannon, Holmdel’s throwing coach, was looking forward to the year a Hornets thrower would receive that honor so that he could present one of the javelins to him. 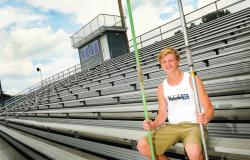 Holmdel High School’s Eric Williams, a 2013 graduate, holds the two javelins he cherished. The one on his right was the one he used in setting the school record this spring, and the one on his left was used by the late Bob Roggy in competition. Roggy’s javelin was given to him by Scott Cannon, his throwing coach at Holmdel and a friend of Roggy. Roggy set the American record in the javelin in 1982 and was ranked No. 1 in the world. STAFF PHOTOGRAPHER ERIC SUCAR That year arrived this spring, when Eric Williams set a school record of 195-9 while finishing second at the NJSIAA Meet of Champions (MOC). He had captured the Group II state title on the way to the MOC.

“I was very honored to win the award,” Williams said. “It was a great moment in my life.”

“I think it’s awesome we can bring the scholarship back to a javelin thrower,” he added. “[Roggy’s] spirit lives on.”

Williams was touched by Cannon’s gift of the javelin used by Roggy in competition.

“It has incredible sentimental value,” the Hornets’ thrower said. “It’s going to hang on the wall with the javelin I set the school record with.”

Roggy’s javelin means so much to Williams that he hasn’t even been tempted to throw it for fear it might break, he noted.

Williams pointed out that Roggy is still inspiring Holmdel students 27 years after his tragic death.

Williams said he believed the Hornets are “honoring his name” by competing in the event.

A statue of Roggy throwing the javelin sits atop Roggy Plaza near the entrance to the football field and track as a reminder to everyone of his importance to the school and the community.

It was only fitting that Cannon had the opportunity to present a javelin that Roggy used in competition to one of his athletes. He grew up in the same Holmdel neighborhood as Roggy, which is not far from the school itself, and was a friend of his. He took up football and throwing because of him.

“Bob led the way,” Cannon said. “We all looked up to him. Bob inspired a lot of people.

“Bob Roggy put Holmdel track on the map, let’s face it” the Hornets’ coach added. “In track, Bob Roggy will never go away.”

The map that Cannon referred to was global thanks to Roggy’s accomplishments.

After starring at Holmdel, Roggy went on to Southern Illinois University, where he won the NCAA championship in 1978 and set a championship meet record with his 293-0 throw.

From 1977 until his death, Roggy was ranked in the top 10 in the country every year, reaching the pinnacle in 1982.

That was the year the ex-Hornets star was ranked No. 1 in the world, the same year he set the American record at 314-4. That 1982 season was a magical one for Roggy, as he broke the American record three times. He broke the record first with a 307-6, followed by a 309-11 and finally out to 314-4 in Stuttgart, Germany. He was the first American to be ranked No. 1 in the world in javelin. He was the top-ranked American four times. But Cannon knew Roggy as more than just a tremendous athlete.

“He would walk into a room and just light it up,” he said. “He’d give you the shirt off his back.”

“Adding to the tragedy, the world lost a good man,” Cannon added “He died too young.”

“I can’t describe the feeling,” Cannon said. “The neighborhood was in shock.”

Roggy would be proud of the javelin tradition he began at Holmdel, which was carried on this year by not only Williams, but also teammate Travis Closs, who finished 10th at the MOC. The Hornets had the best one-two in the event with Closs, a junior, coming up with a personal best of 181-5 at the MOC.

Williams, at 6 feet tall and 160 pounds, was the smallest competitor in the field, but it takes more than size and muscle to throw the spear well.

Williams ran cross-country for the Hornets as a freshman. He said he gave the javelin a try in the spring because he used to be a catcher in baseball and knew the throwing motion. He just tried it and liked it, finding that his crosscountry running would come in handy.

“For me, everything is speed and getting the perfect technique,” he said. “Then I work on power.”

With the help of Cannon, Williams, who is headed to Arizona State University to major in civil engineering, broke down every facet of the throw.

“Everything has a point and a purpose,” he said.

Point and purpose came together at the MOC, where the recent Holmdel graduate “did it right finally,” uncorking his school record of 195-9. It was a throw that would have been met with approval from Roggy.