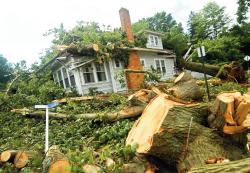 Photos show damage done by a wind and rain storm that hit Freehold Borough at 10 p.m. July 28. Above, a tree split a home on Oak Street; at right, a car on Glendale Road was crushed by a falling tree. PHOTOS BY JEFF GRANIT staff The sound of chainsaws filled the air all around Freehold Borough on the afternoon of July 29 as residents and work crews attempted to dig out of the damage a vicious wind and rain storm left in its wake on the evening of July 28.

Published reports quoted representatives of the National Weather Service in Mount Holly as saying a weather incident known as a supercell struck the borough.

Parts of some streets remained blocked by downed trees and power lines as residents sought to comprehend the scope of the damage.

In the early afternoon hours of July 29, power remained out to a significant portion of the community, including the traffic light at the busy downtown intersection of East Main, Center and Spring streets and Broadway. Police tape prevented pedestrians and motorists from entering certain areas where downed trees, mounds of brush and power lines that might be live were in the street. 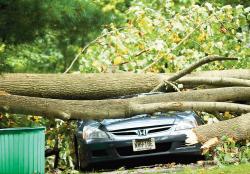 Tony Cruz has lived in a home at the corner of Manalapan Avenue and Frances Drive for four months. At 12:30 p.m. he was contemplating a tree that lay across the roof of his home and hundreds of pounds of tree limbs that had fallen into his yard from a neighboring property.

Cruz said he spent part of the morning clearing brush from the property of an elderly neighbor who lives alone. The tree limbs and brush in the yard of Cruz’s neighbor just about covered a detached garage on that lot.

The tree that fell on Cruz’s home was on Frances Drive, and when it was toppled by the storm that hit town at about 10 p.m. July 28, it took with it a significant chunk of sidewalk — four or five squares of concrete ripped up with the tree, exposing a gaping hole of mud and water underneath. 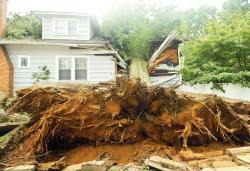 A tree divides a house on Oak Street, Freehold, (above) in the aftermath of a July 28 wind and rain storm. Many old trees (below) were uprooted and will lose their place in town. PHOTOS BY JEFF GRANIT staff A driving trip through the borough next revealed a tree down in front of a home on Yard Avenue. The tree hit power lines on its way to the ground, and shortly before 1 p.m. those power lines were still entangled with the tree. That turned out to be a familiar sight as a reporter made his way around town.

The sound of people using chain saws on their property reverberated up and down Yard Avenue even as borough officials were meeting at the Freehold Fire Department and preparing to warn residents not to clean up the brush in their yards for fear that live power lines could be entangled in the mess. 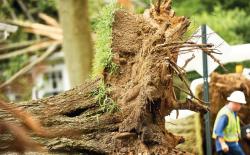 At one point, as a reporter was standing on a street near several police officers, a call came over the radio reporting that representatives of a tree removal service had cut power lines while they were in the process of cleaning up tree debris.

Some of the most significant damage in Freehold Borough appeared to have occurred on Oak Street, where a tree blocked the street near Robertsville Road, and at Oak and Fulton streets, where a crew was hard at work dealing with a situation that saw a tree fall on a home, splitting the structure in half. One resident of that area said his clock stopped at 10:15 p.m. July 28 when the power went out, and he said that when he looked outside he saw power lines burning on Oak Street.

Residents spoke of seeing railroad ties that were stacked in a backyard tossed around like toothpicks, and former mayor Michael Wilson, a lifelong resident of the borough, stood on Oak Street and said he had never seen anything like the storm that blew through town the previous night. 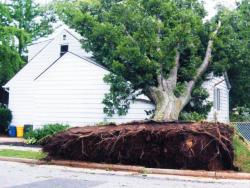 An uprooted tree took out a sidewalk and part of a home on Frances Avenue. MARK ROSMAN A drive to the other side of the borough revealed trees down on Bennett Street, just off Jackson Street, and a tree down on the lawn of the historic Bennett Street School.

One member of a Jersey Central Power & Light crew that arrived on Bennett Street at about 1:50 p.m. said he believed power was still out to a significant portion of the town.

Mayor Nolan Higgins declared Freehold Borough to be in a state of emergency at 11 p.m. July 28, according to Monmouth County spokesman William Heine, who was in the borough representing the county.

At 6 a.m. July 30, signs on Route 9 indicated the state of emergency was still in effect.

Heine said Monmouth County was called in to assist the borough in the aftermath of the storm. Employees from the county’s Highway Division could be seen all around town on the afternoon of July 29 helping to clear downed trees.

Power was expected to remain out in parts of the borough through July 31, and Higgins put a dusk-to-dawn curfew in place. People were being asked to stay out of town unless they live or work there.

Heine said there were no storm-related injuries reported.

He said JCP&L had 30 crews in the borough on July 29 and was expecting another 70 crews that evening, with some crews coming from out of the area to help assess the damage. An initial count determined there were at least 20 known broken utility poles, with more damage expected to be uncovered as the cleanup continued.

He reported that on the afternoon of July 29 there were 50 public works crews out assessing damage and helping to clear streets of trees and debris. Freehold Borough streets and roads employees and Shade Tree Commission members were also assisting in the cleanup.

In the hours after the storm hit, Freehold Borough police, with assistance from neighboring law enforcement agencies, were controlling traffic and blocking streets to keep people from entering town. All borough police officers were called into work as the storm reached town on the evening of July 28.

Firefighters were on call and had responded to dozens of calls as of the afternoon of July 29.

“Safety is our first concern,” Heine said, adding that JCP&L executives had serious concerns about downed live wires that might be hidden under tree branches and debris. Residents were being warned not to attempt to clear the trees and debris due to possible injury from live wires.

Although traveling around Freehold Borough by car on July 29 was difficult with so many streets blocked, some people traveled with relative ease on a bicycle.

Freehold Township resident Kenneth Grayzel said he has lived in the area for 18 years and has never seen a storm that left so much damage.

“We have seen storms, including Hurricane [Tropical Storm] Irene, that left so much damage in our towns, but never have I ever seen so much damage in one area,” Grayzel said, referring to the downed trees, power lines and damage to homes in the Oak Street and Fulton Street section of the borough.

“It looked like a bomb hit the entire street,” he said, noting that two homes looked especially damaged with trees lying on top of them, pushing through windows and pressing through the roof.

Grayzel added a positive note in his interview. He said that despite the staggering amount of damage, the likes of which residents he spoke with have never seen in the borough, he witnessed some familiar and welcome sights that spoke of hope, not devastation.

Grayzel said that as he rode along Main Street where some eateries were open for business, he saw walkers and bikers in the downtown area and diners sitting at the town’s outdoor cafes having coffee or breakfast, taking a much-needed break from what had been a very unusual and memorable event.