The family of Christian Peters, whose organs were donated after he died in 2007, attends a ceremony at JFK Medical Center on April 18 to promote organ donation. New Jersey was cited as having comparatively low donor-registration statistics. JEFF GRANIT staff Edison Mayor Antonia Ricigliano held up her driver’s license in front of a small crowd outside JFK Medical Center onApril 18. The mayor did not need to prove her age or place of residency, but rather her status as an organ donor.

Ricigliano, along with Woodbridge Mayor John McCormac, read a joint resolution in support of National Donate Life Month. The month of April is commemorated around the country as a time to educate citizens about the critical need for more organ and tissue donors.

In coordination with this effort, NJ Sharing Network organized a ceremony last week during which a Donate Life flag was raised outside JFK Medical Center. The hospital will raise the flag for 24 hours after a donation is made at the facility. 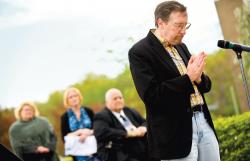 Organ recipient Jim O’Hea, of Woodbridge, becomes emotional while retelling his heart transplant experience to a small crowd gathered at JFK Medical Center to mark Donate Life Month. PHOTOS BY JEFF GRANIT STAFF Ricigliano told the small crowd surrounding the flagpole that she has been an organ donor for years and knows both donors and recipients personally.

“It extends both the life of the donor and the recipient,” she said.

The family of Christian Peters came to know this truth after Peters died unexpectedly. Peters, a police dispatcher and EMT volunteer in Roselle, suffered an aneurism at JFK Hospital in November 2007.

Peters’ parents, Vicky and Robert, of Parlin, and his sister Heather remain close to the recipients of Peters’ organs and even attended the wedding of the heart recipient’s daughter. Vicky told attendees that her son was adamant about becoming a donor long before his tragic death. 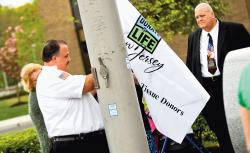 Robert Peters, whose son Christian died unexpectedly in 2007, helps raise the Donate Life flag at JFK Medical Center. Christian’s organs were donated to various recipients after his passing. “He thought it was very important that the gift of life go on, so we knew this was the last thing we could do for our son,” she said. “I hope you consider being a donor and spread the word, because we do.”

NJ Sharing Network aims to convince 20 million Americans to become organ donors in 2012. According to the organization, approximately 18 people die every day on the organ waiting list. The number of organ transplants performed in the state has declined in the past several years. “There are over 112,000 people on the national waiting list on a regular basis, and more than 5,000 in New Jersey alone,” said Joe Roth, president and CEO of NJ Sharing Network. “We are partnering with elected officials and hospitals this month with one key goal: helping ensure everyone who needs a transplant should be able to get one.” McCormac pointed out New Jersey’s comparatively low donor-registration statistics, saying that only 143 people donated organs last year.

“This is why this event is so important,” he said. “We implore our residents to become donors, so we can turn those statistics around.”

Jim O’Hea, of Woodbridge, fully comprehends the importance of organ donation. He received a donor’s heart after he was diagnosed with congestive heart failure in 2008. He said his heart was working at 30 percent when he was admitted to the hospital in October of that year.

“I was put on the waiting list on November 18, and on November 23, a man in Clifton was at Mass when there was an altercation,” he said.

O’Hea struggled through tears to tell the story of a Clifton man who tried to intercede during a domestic dispute. A California man attempted to harm his ex-wife inside a church, and the Clifton man was fatally shot during the incident. O’Hea received his heart, and other patients received his kidneys, lungs, liver and pancreas.

“Because of his amazing gift, we are all here today,” he said. “This could happen to anybody at any time, and this is up to us. You’re not going to use [the organs]. Leave them to somebody else.”

Raymond Fredericks, president and CEO of JFK Medical Center, said he was moved by both the Peters’ and O’Hea’s stories, which made him think of his three children. He noted that 12 people donated organs, and 17 people donated tissue at the center last year, and 850 people benefited from those donations.

“One donation can touch so many lives,” he said. “We are so supportive of this initiative.”

NJ Sharing Network celebrated National Donate Life Blue and Green Day on April 20 to draw attention to the need for more people to register as organ donors. New Jersey ranks 41 out of 50 states, with only 31 percent of adults registered as organ and tissue donors. The network aims to boost those numbers in an effort to reach a national goal of 50 percent registered donors.

National Donate Life Blue and Green Day is one of several national opportunities in the 20 Million in 2012 campaign to partner in support of organ and tissue donation. For more information on how to register, visit www.sharenj.org. Contact Deanna McLafferty at dmclafferty@gmnews.com.