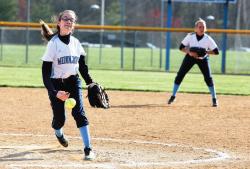 The right-hander tossed two games tallying 10 strikeouts and allowing only one run in 12 innings, including a complete-game shutout over Camden County College. She also beat Bergen Community College, allowing only two hits and one earned run as Middlesex won the contest 9-1.

Sophomore catcher Morgan Widener is 11th in the Region in hitting, batting .444 with 31 RBIs and 31 runs scored. She is a Monroe High School graduate.

Cindy Pydeski, a freshman from Colonia, is batting .418 with 23 RBIs.

Sophomore Mattea Ardizzone (Edison) is batting .364 for Middlesex. Another Edison grad, Morgan Brown, a freshman, has scored 22 runs and is batting .333.

Nicole Gibbons, a teammate of Mc- Cormick’s at North Brunswick, is batting .315 with 18 RBIs and 10 runs scored. She’s a freshman outfielder.

Middlesex is 11-11 on the season and 6- 5 in the Garden State Athletic Association.

Middlesex will host Sussex on April 19 in a GSAC double-header that starts at 3:30 p.m.