Skip to content
Spotswood H.S. team off to a 7-1 start
BY JIMMY ALLINDER Correspondent 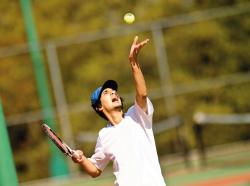 Construction is proceeding ahead of schedule: the Chargers were 7-1 as of last weekend.

Spotswood showed it belongs in the conversation as one of the better teams in the Greater Middlesex Conference on April 16, when it split a triangular meet with North Brunswick (186-198 victory) and stateranked Metuchen (186-169 loss). One of the team’s quality wins was a season-opening four-stroke victory over Monroe, another top GMC opponent.

“We’ve had this success with just a handful of starters back from last year,” observed Frank Marchesi, Spotswood coach. “The victory over Monroe was against one of the best teams in the White Division.”

Marchesi, whose career spans 46 years during which he coached the Cedar Ridge boys soccer and girls basketball teams, retired from the Old Bridge district in 2000. He took over the Spotswood golf program that year.

Under the veteran coach’s watch, the program has experienced consistent success and reached a peak in 2005 when the Chargers captured the division title. Then Spotswood hit a roadblock last year when the district decided not to fund the team. That’s when parents jumped in and formed the Spotswood Hole in One Club, which has become the golfers’ primary sponsor. Marchesi says the team has also benefited from being able to play matches on the Rossmoor Course in Monroe.

“I can’t thank the parents and the golf course enough,” he said. “Without their support, it would not have been possible to have a golf team.”

Senior C.J. Clementi, a four-year starter, has led the team in average, 7.3 over par. He has made the All-White Division team the last two seasons. Junior Chris Esposito has been consistently averaging 10 over par, and junior Trevor Miller has averaged 12 over. The rest of the team includes senior Dylan Craft, a first-time starter, who has improved his swing to where he is contributing with a 14-over-par average. Senior Brett Klein is a newcomer and another first-year starter, and Mike Molloy has the potential to become an outstanding striker.

“Generally speaking,” he said, “I try to teach the kids the proper grip, spine angle, alignment, takeaway, down swing and follow through in golf. We emphasize chipping, pitching, and hitting targets from 100 to 150 yards.

“Putting is another skill that can separate a quality golfer from an average one,” he continues. “In high school golf, six players participate in a match and the best four scores count. We emphasize to every golfer to aim at playing boogey golf. That’s like getting a 45 on a par 36, nine-hole course. On a good day, if a player can putt and strike the ball well, he may be able to score under 45, which can be the difference between winning and losing.”