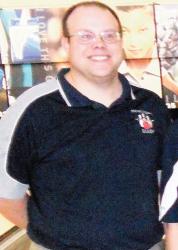 Dave Clampffer I f a team can be said to be a reflection of its head coach, then it becomes easy to explain Howell High School’s incredible success on the bowling alleys. In Dave Clampffer, the Rebels have a coach who is totally committed to the sport and to his bowlers.

“I have a passion for the sport,” he said. “They (the bowlers) can tell when you are passionate about something. It becomes contagious.”

Without a lot of fanfare, Clampffer has built one of the greatest sports programs in Freehold Regional High School District history. Since bowling became a varsity sport at the start of the 1999-2000 season, the Howell girls and boys teams have been models of proficiency.

The girls have won a state championship (2002), Shore Conference division titles in 11 of their 12 seasons (including 2011-12) and two Central Jersey Group IV state sectional titles.

Both teams have won many in-season tournaments over the years.

This past winter the Howell girls went 45-0 while winning the Shore Conference B North Division title. The Rebels also won the Monmouth County, Shore Conference and NJSIAA Central Jersey IV titles and they finished second at the Group IV state tournament.

The boys captured their division title on the last day of competition by beating Freehold Township, 2-1, to win the title by one game. The Rebels also won the county tournament.

While all of this has been going on, Clampffer has been ringing up dual meet victories like a pinball machine. The coach has surpassed 1,000 career wins at Howell (1,105 wins, 237 losses). That is a staggering total and a true milestone, although the humble Clampffer pointed out that he coaches two teams (boys and girls).

Clampffer does not want to take credit for any Howell victory. He says it was all his players.

Yet, as the Rebels crank out one championship after another, with new faces, it is the Howell bowlers who are the lucky ones — lucky to be part of this unmatched success, and they will tell you so.

To Clampffer, coaching is an extension of the classroom. He takes the same approach in coaching the bowling teams that he does teaching math.

“I do a lot of teaching,” he said. “I bring the classroom to the bowling alley. You learn about the kids and you learn what works. You treat individuals with respect and dignity.” Maybe therein lies one of the secrets to his success. Bowling began as a club sport at Howell. Clampffer saw that the club’s members had talent and he went to school administrators to ask for bowling to be made a varsity sport. Howell’s first team was in 1990-2000 and it was co-ed. The team’s record was 46-8 (best of three games wins a match in dual meet play).

The girls began in earnest the next season and in 2002 the Rebels won the NJSIAA Tournament of Champions title. Howell was 53-1 and 54-0 in dual meets in their first two years.

When bowling became a varsity sport, Clampffer had no blueprint he was going to follow.

“I just wanted to get into coaching,” he said. “The sport I know best was bowling. I did it in college (Trenton State College, now The College of New Jersey).”

He took the principles from the classroom to the bowling alley, treated his players with dignity, and in short order success and winning became contagious.

Like all successful coaches, teaching the sport’s basics is where it all begins for Clampffer.

“No one throws the ball exactly the same way, but the fundamentals are the same — balance and the arm swing,” he said.

Clampffer, more than anyone, knows that “never give up” is more than a cliché. He was cut from his high school team at Middletown North, but that setback did not stop him from trying. He loved the sport too much to quit and by the time he was in college he was good enough to compete on the Trenton State College squad.

When the coach tells a player not to give up, he means it. He does not like to cut a student from the bowling squad, and the young people he does cut are encouraged to try again. He gives them things to work on that will make them better.

“I keep it positive,” he said.

He has had players who were cut one year return the next winter and be good enough to make the team. That is all because Clampffer does not believe in giving up on anyone.

Following each season, Clampffer holds a team meeting with all of the players who will be returning to the Rebels’ lineup the following year.

“We set our goals for the next season and how we are going to get there,” he said, adding that hard work in the off-season is one way to attain those goals.

Howell’s bowling teams have never suffered from complacency because Clampffer is not one to rest on the team’s laurels.

The same determination that allowed Clampffer to earn a spot on his college team has been adopted by his players. There is no magic formula behind their unparalleled success. The Rebels win because they work as hard as anyone else.

Anyone who visits Howell Lanes at any time of the year will most likely find Howell High School bowlers practicing. The sport and the team mean that much to the student-athletes. The players take pride in being a part of Howell bowling.

Clampffer was especially proud of his 2011-12 girls team, not because of the young people’s achievements, but because of the improvement every player made from the previous season. He never had a team that had displayed such dramatic improvement from one season to the next.

Staying on top when every opponent is after you in every match is what makes winning championships year after year so difficult and what makes what the Rebels have achieved so special. One thing that has kept Howell winning is the players’ ability to perform under pressure, to roll a strike when they need one. This mental toughness comes from practice.

How does the coach teach this mental toughness”

“We simulate pressure in practice,” he said .

The bowlers have earned respect at the school because of their exploits.

“They are respected because of the results,” Clampffer said.

Lisa Friscioni, the leader of the 2002 state championship team that is the gold standard at Howell, was a member of Fairleigh Dickinson University’s national championship team of 2006. She is now serving as FDU’s assistant coach and is the only person to win an NCAAtitle as a player and as a coach.

Meghan Kelly, now a senior at FDU, was a member of the Knights’ 2010 NCAA championship team.

Another former Rebel, Jessica Henry, is competing for St. Francis, Pa., and Ashley Buck is at Norfolk State.