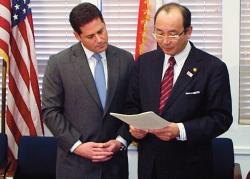 Marlboro Mayor Jonathan Hornik looks on as Mayor Mikio Tanaka of Nanto City, Japan, offers remarks to attendees of a Feb. 23 ceremony in Marlboro during which the two municipalities renewed a longstanding sister city agreement. JACK MURTHA MARLBORO — Decorations inspired by the Far East adorned the walls of a Town Hall meeting room on the afternoon of Feb. 23 as Marlboro Mayor Jonathan Hornik resigned his community’s sister city agreement with Nanto City, Japan.

“It reminds me of how important the relationship is between both of us,” Hornik said. “It’s not only within our thoughts — it’s in our hearts.”

Marlboro officials originally signed the sister city agreement with Johana, Japan, in 1997, which formalized a friendship that began in 1991.

During summer vacations, students from both towns have journeyed to each other’s nation to experience everyday life and some of the cultural landmarks of each society.

Johana merged with several other municipalities in 2004 to form the larger Nanto City. The re-signing ceremony marked the first official agreement between Marlboro and the larger collective of Nanto City, although the municipalities had continued to participate in the youth exchange program beforehand.

“I am eternally grateful for the opportunity to confirm our bond with the spirit and cooperation of everyone involved and everyone present here today,” said Tanaka, who was one of six Japanese delegates present for the ceremony. “We strongly believe that our relationship will grow more lively with each continued youth exchange.”

Hornik declared Feb. 23, 2012 to be Youth Exchange Agreement Day in Marlboro. He said the program has promoted “improved relationships and mutual understanding” since its inception.

An earthquake off the coast of Japan caused a massive tsunami to strike the country on March 11, 2011. The natural disaster then triggered a catastrophe at the Fukushima Daiichi nuclear power plant, Tanaka reminded those in attendance.

Nanto City students who visited Marlboro later in 2011 received not only emotional support, but a monetary donation for the victims of the earthquake and the tsunami, Tanaka said.

“We were reminded yet again of the strong bond that ties Marlboro and Nanto together,” he said. “We are deeply grateful for all of your consideration and all of your love.”

Many Marlboro residents called the mayor’s office to ask how they could help people in Japan after the natural disasters struck the nation, Hornik said.

“It was the least we could do,” he said. “The community really came together. It was like it happened to us.”

After the signing, Hornik took the guests from Nanto on a tour of Town Hall, before exchanging gifts during dinner.