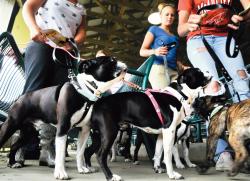 “A lot of people know their dog is cute, but does it have potential?” Wolfe asked.

She answered this question by stating that dogs are only as good as the skills they are given, either by the owner or a professional trainer. Acting dogs must know how to sit and stay, no matter what, she said.

Dogs should also walk well with other people, without looking around to see “where’s my mommy?” she said. Wolfe advised owners looking to find acting work for their dogs to let other people walk them during training, using the command “Go with.”

While it doesn’t hurt for dogs to have a lot of tricks in their repertoire, they are regularly sought for jumping on sofas, lying down, and putting their heads down as if sleeping on command, she said. Fetching is also very desirable, as is sneezing on command, she said. Some peculiar behaviors could also help a dog make money in the entertainment business, she said, noting that she has trained some of her pooches to hump a person’s leg on command.

Owners seeking a show business career for their canines should also try dressing their dogs in various outfits, even if they wouldn’t normally dress a dog. Since costumes may be required for a job, the more types of outfits, including hats and sunglasses, that the dog is comfortable wearing, the better, according to Wolfe.

Purebred dogs get the most acting work, because feature film and commercial producers like to be able to hire doubles, she said. Wolfe also had suggestions for owners who believe they have show business felines. Producers usually cast a cat to sit on a table or rub against an actor’s leg. Owners can train cats using a laser pointer or a buzzer, she said. Using a buzzer when opening a can of cat food trains a cat to associate the sound with feeding. Once a cat gets on the set, it will move from one place to another at the sound of the buzzer, she said.

Several local residents brought their dogs for Wolfe’s feedback. Jackie Morgan, Millstone, who runs the dogtraining facility Canine Perspective, brought her 6-yearold German shepherd, Vader, to the audition. Morgan has some show business animal experience, and she helped train wolves used in the Disney film “The Sorcerer’sApprentice.” AtWolf’s request, Vader retrieved a hairbrush and sat still with it in his mouth.

Mary Alice Goss, Freehold, said that her 13-year-old rescue dog, Jack, may be small but he has “enormous talent.” She said the Jack Russell terrier goes to work with her at Community Grants Planning and Housing in East Windsor. She said her boss allows employees to bring their dogs, which are all rescues, to work.

Nancy Cimino, Plumsted Township, who owns Paints to Perfection Show Stable and specializes in paint horses, brought her blackand white Boston terriers and her French bulldog to the talent search.

For more information about Wolfe and what qualities she looks for to turn a pet into a star, visit nycdogtrainer.com.