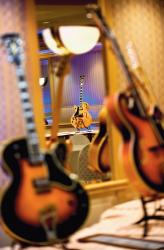 I t’s a story that might make William Shakespeare proud. “We’ve got passion, we’ve got love, we have beauty, we have death and we have suicide … it’s everything that Shakespeare would have written about,” said Christopher Wylde, who had been a professional musician in England before moving to Milltown 15 years ago.

Wylde’s part in the story is to fulfill the wish of his late friend Howard Krive of Metuchen. Just before his untimely death in 2008 after battling cancer, Krive asked that his coveted collection of 31 Sam Koontz guitars be sold off as one collection.

“I’m not sure if we can actually make this happen, but the collection in itself should be recognized, as well as Sam and Howard,” Wylde said .

That is why Wylde, along with the likes of guitarist and vocalist Ed Laub, guitarist Jerry Topinka and guitarist Walt Bibinger, came together to honor the lives of Sam Koontz, who made his first classical guitar in 1959, and Howard Krive, who had a love and passion for his guitars, at the Pines Manor in Edison on Dec. 15. Guitar enthusiasts were able to observe and play the 31 guitars displayed at the large hall. 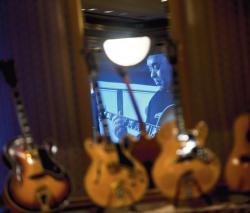 Above: A mirror reflects an image of Christopher Wylde playing a Sam Koontz guitar in a video shown recently at the Pines Manor in Edison. Wylde, of Milltown, hosted the Koontz guitar celebration with 31 hand-crafted guitars owned by the late Howard Krive of Metuchen. Left: A guitar from the collection is exhibited. More photos at gmnews.com. PHOTOS BY JEFF GRANIT staff As a lasting legacy and final tribute to both Koontz and Krive, the guitars will be featured in a PBS documentary with noted player Bob Miles, host of “World of Guitar” and “Miles of Music.” The musical and entertaining program will allow viewers to fully understand and appreciate Koontz’ work, courtesy of Krive’s guitar collection. The documentary is expected to air in 2011 . 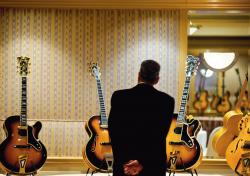 The guitars will be featured in a multi-part PBS documentary on Sam Koontz and his work. JEFF GRANIT staff Wylde showed a clip of the film at the event in Edison.

“I met Howard in 1995 at the Sam Ash store on Route 27 in Edison,” he said. “I had just moved to New Jersey and didn’t know anybody besides my wife’s family. We struck up a conversation and had a nice friendship from there, sharing a passion for music and guitars in particular.” Krive would visit Wylde in Milltown and bring his latest “toy” from his collection.

“It was always spectacular,” he said.

Krive had collected roughly 150 guitars, including the 31 Koontz guitars.

“I really didn’t know how much he had, but I knew he loved Sam Koontz guitars in particular,” he said. “He had visions of writing a book about Sam before he passed away.”

Wylde said he was flabbergasted when Krive’s parents invited him to sift through the collection.

“I opened a case for a Sam Koontz guitar 31 times,” he said. “It was just shocking to me. It is a story within itself. These are the moments in life that just take your breath away.”

Wylde said it is different when talking about master guitar builders such as D’Angelico, D’Aquisto, W.E. Moll, Benedetto, Gibson and others.

“D’Angelico and D’Aquisto guitars have global appeal and the 1,000-plus guitars have always been found for sale,” he said. “With Sam Koontz, he only made a little over 200 guitars before he committed suicide in 1981. So the 31 Koontz guitars were definitely a rare find.”

“Just the design and craftsmanship, some with the scroll patterns on the guitars, are amazing,” he said. “Koontz would travel all the way to Germany and purchase the wood for his guitars.”

Professional guitarist Wayne Wesley Johnson wrote about the Koontz guitars. The guitar maker created a “Studio One” version just for him. In his article, he explained that Koontz set up his own guitar shop in Linden in 1970. He worked as a shop foreman for the Framus line importer and later designed guitars for the Framus factory.

He was then assigned the task of developing the Standel and Harptone guitar lines, including the manufacturing procedures. In some cases, he even designed the machinery that was used to manufacture the instruments.

In his Linden shop, Koontz continued to fashion guitars with custom work and repairs.

“An innovative craftsman, he was continually looking for and working toward improvements and refinements for fretted instruments,” Johnson wrote.

Wylde said it is amazing that one of the greatest guitar craftsmen was based in Linden .“ When you think of Linden, you think of industry, factories, the [nearby] airport… not the creativity and talent that was there,” he said.

Krive was born in Brooklyn, N.Y., but moved as a young boy to New Jersey and found himself living close to Koontz’s shop.

“He got to know Koontz and so began a love affair with his guitars,” Wylde said.

It could be said that Krive had a polygamous relationship with his guitars, according to Wylde.

“That was his love … he just lived for those guitars,” he said.

Wylde said he does not believe that Koontz made a guitar for Krive.

“He just began trading other guitars to make room for more Koontz guitars,” he said .

Krive’s younger brother, Alan, said the whole event was a legacy of his brother’s dying wish to pass on his collection so that it is housed in one place. Alan attended the recent event in Edison with his parents.

“In this day and age, it will be worth millions, and that is a lot to throw around,” he said. “It is a tough promise, but at least we will try … maybe there is one person out there.”

“I don’t even play, but I know this was a big part of my brother’s life,” he said. “My brother was the kindest and gentlest person; he would give you the shirt off his back.”

Wylde said that, besides the Koontz collection, he has already sold 75 pieces from Krive’s overall collection on behalf of the family.

Wylde can be emailed at cawylde@hotmail.com.