You never know what to expect as an actor, but Marlboro native Paul Wesley can expect to have audiences watching him on the CW’s “The Vampire Diaries” on Thursdays this fall. 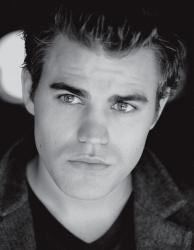 Paul Wesley Wesley, 27, was on location in Atlanta, Ga., when he took time to speak with a reporter about his upcoming television venture.

“The Vampire Diaries” is inspired by the popular young-adult book series by L.J. Smith. The series is set to premiere on the CW on Sept. 10 at 8 p.m.

Wesley will portray Stefan Salvatore, a centuries-old vampire who is struggling to live peacefully among humans. As Stefan works to keep peace, his evil brother, Damon, played by Ian Somerhalder (“Lost”), returns. The two brothers battle for the soul of the lovely Elena Gilbert, played by Nina Dobrev (“Degrassi: The Next Generation”).

With the book series’ established fan base and the recent phenomenon surrounding vampire stories following the release of films such as “Twilight,” Internet message boards relating to “The Vampire Diaries” indicate that the show should expect a large number of viewers.

Wesley said the television series will be slightly altered from the original book series in order to adapt it to the small screen. One example he offered was that his character, Stefan, will be a vampire during the Civil War. In the book series Stefan comes from Renaissance Italy.

In the present time, Stefan is still grieving the tragic loss of his love during the Civil War when he meets Elena, who is the mirror image of his lost love. Damon returns to compete for Elena’s affections, Wesley explained.

He said the show features outstanding talent in front of and behind the camera.

“It’s definitely one of the things I’ve done that I’m most proud of,” Wesley said of “The Vampire Diaries.”

If his face seems familiar, it is likely because Wesley has a long résumé of appearances in television shows and feature films.

The actor has appeared on “Army Wives” as Pfc. Logan Atwater, and on “American Dreams,” and he has had small roles on “CSI: NY” and “Law & Order: Special Victims Unit.” Wesley also appeared in the 2008 feature film “Killer Movie.”

Wesley said he became interested in acting at a young age. While he attended school, he did some theater, which sparked his interest.

“I realized that I really enjoyed it,” Wesley said. Wesley attended Christian BrothersAcademy in Lincroft and Marlboro High School for a period during his high school years.

If the name Wesley does not ring a bell to residents of Marlboro, it is because that is the actor’s stage name. His real last name is Wasilewski.

During his junior year in high school, Wesley was cast in the soap opera “The Guiding Light” as character Max Nickerson. He transferred from Marlboro High School to Lakewood Prep in Howell because the school was able to accommodate his acting schedule.

“I would go to school once or twice a week, but they were really awesome and let me do the work from home. They facilitated it so I was able to get a high school degree,” Wesley said, praising Lakewood Prep for working with his filming schedule.

Wesley graduated from the school in 2000.

He started college at Rutgers University but left after one semester when more roles were offered to him and he realized he could make a career out of acting.

Wesley said he is happy to be working in a job he loves.

When asked what he loves most about his profession, the actor said, “The same thing that makes me nervous, which is never knowing what will happen next. That’s what I love about it. I never know what character I’m going to play next, I never know what location I’ll be in next. With each new character, I find something new about myself that I didn’t know before.”

Wesley said that in portraying Stefan, he has discovered serenity because in being a centuries-old vampire, there is a certain peaceful stillness to his character. To capture that peacefulness, Wesley said, he has discovered forms of meditation of which he had previously been unaware.

Wesley has a wealth of memories from the many sets he has worked on; however, his favorite memory is not linked to any particular set.

“I’ve made so many good friends. A lot of the people that are closest to me I’ve met on sets. I’ve built some great relationships,” Wesley said.