The phone rang at 8:15 a.m. Feb. 25 and I found out that George had died at 4 a.m. George H. Moss Jr., the historian for Rumson and Monmouth County, had passed into history, and I smiled, because to George, history always lived and breathed, sometimes more than present-day life. 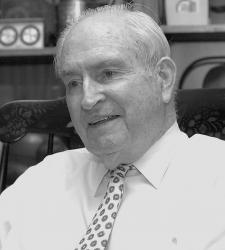 George H. Moss Jr. George taught me a very important history lesson. History is all about collecting and telling stories, most importantly with props that can visually substantiate the narrative.

I learned that lesson in over 20 years at The Riverview Press in Little Silver, where my father (Bill Howitt) and I printed George’s books. Starting in 1963 with Navoo to the Hook, my dad aided George in organizing the material and designing the presentations. While dad was alive, George produced Navoo, then Steamboat to the Shore (three printings), Double Exposure, Those Innocent Years and Another Look at Navoo to the Hook. After my dad’s death, George did not stop. He and I completed Double Exposure Two, then the paperback edition of Those Innocent Years, Victorian Summers, and finally Twice Told Tales.

These books were never produced for profit because George believed that history needed to be recorded. His goals on all projects were to, at minimum, break even, and at most, start funding his next endeavor. Up until a year before his death, he spoke passionately about his next book, a history of oystering on the Navesink River. His passion for this project was due to memories of the finest oysters in the world that existed in the Navesink up until the 1940s. By recording their history, George would be bringing that era back to life. History to him was a re-creation of the past, so it would seem like the present. That’s why so much of his collections were photos and items, what George called ephemera.

Most of his treasures were found through searching in odd places. After a summer trip to Vermont, George returned to Monmouth County with an incredible find. While rummaging through a garage sale, he came across a shoebox of stereoviews (a mid-19th century form of 3D photography). George informed the seller that he wanted the stereoviews of Monmouth County, since his collection was concentrated in that subject. There were hundreds of stereoviews at this garage sale, and the owner asked, “Do you know how valuable these are?” So George asked and was told $50 for the box. After pondering the price, George agreed and brought the box back to the Moss Archives. By the way, George had recognized one particular stereoview of a funeral processionwith an ornate casket. The Moss Archives now had a steroeview of Abraham Lincoln’s funeral procession through the streets of Philadelphia in 1865, which was easily worth 10 times the purchase price.

The Moss Archives contained numerous treasures. There were the boxes of stereoviews; the bottle collection that George started in his youth by wandering the beaches of Long Branch, Sea Bright and Sandy Hook; a collection of political memorabilia from national elections, including posters and buttons; and all sorts of Monmouth County memorabilia, especially from the grand hotels featured in the book Victorian Summers. Treasured most of all was the vast collection of Pach Brothers glass negatives from the photo studio

with offices in Long Branch and New York, which recorded the history of Monmouth County from the 1800s to the 1900s in exquisite detail. Finally, there was that vast record collection of 78 rpms, which he gifted to FairleighDickinsonUniversity, who then passed it to its present home, the Library of Congress. George received a letter from the Library of Congress complimenting him on the vastness of that record collection, and then he remarked,” I never paid more than 50 cents for any of those records at any garage sale.” That’s how George was, history is not expensive to collect, but it is always memorable and priceless when you let other people learn from it.

Dad and I were the scribes of all this history. Usually a project began with a phone call from out of the blue when George would say “I was thinking about . . ., and can I stop by in a little while to talk to you.”

That’s when our work day would end and the adventure

idea would be incredible, the history unknown, and the material needed to be printed. George usually came with another family member. At the beginning, his mother would wait in the car, while George would go over the progress of a project. In later years, it would be his wife, then one of his daughters and finally, his daughters with grandchildren in car seats. Four generations of the Moss family had waited patiently in The Riverview Press parking lot while George would record history. From my perspective, their patience is extremely noteworthy.

George constantly gave to the community. He did a historical pamphlet on the Twin Lights. He provided the material for the anniversary book of Holy Cross Church, Rumson. He was there at the beginning of Monmouth Museum and a longtime board member of the Monmouth County Historical Association. Also for the county, he produced The Black Birth Book and The Manumissions Book, which detailed the children born to slaves in the 1700s and 1800s, and then the freed slaves in the 1800s, so the county’s African-American residents could have access to public records about their ancestry. Those two books are in every library in the county.

George actually did not think he was very notable. In his view, the history he recorded was created by someone else. Finally, later in life, as the accolades and awards came in, I think George realized that his body of work was quite special. Especially to all of us, who worked with him.

During the production of one of his books, George brought his video camera to record the entire process of producing his book. It is the only record that I have of a business that my family operated for over 48 years. George narrated the film and painstakingly recorded every detail of the printing process – most of which is now outdated in the digital age. When I put the recording on, the history still comes to life – my father and our employees working on the equipment – all the characters and quirks in place with that calm and descriptive voice providing the narrative.

The video ends with George’s wife Maryalice at the dining room table putting dust jackets on Another Look at Navoo to the Hook. The dining room is filled with boxes – some full, some empty – and the next-day deliveries to local bookstores are lined up against the wall. And George’s calm voice says, “And if we are really lucky, we will celebrate Christmas in this room in a couple of days.” Another piece of history that Maryalice would pull together and George H. Moss Jr. made sure was recorded.

Ken Howitt (keh32@columbia.edu) worked for 20 years at The Riverview Press, founded in 1955 by his parents, Bill and Mildred Howitt. It closed in 2003.