Many forms of art lift your spirits. Vicky Culver’s photo collages lift your senses as well. The artist’s unique creations combine photographs of varying and opposing textures, lights and dimensions to create a multitude of patterns that elicit varying emotions.You can’t help but take an extraminute or two to take it all in. 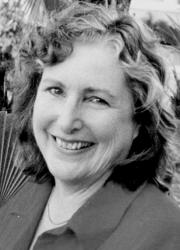 Vicky Culver “I get excited by the use of light and dark, warm and cold colors, textured and non-textured,” Culver said. “I like to experiment using dimensional things. Some are layered, some use broken glass. Some suggest tranquility while others are vibrant and exciting.”

Culver, a resident of Howell for more than 20 years, said that when she moved to New Jersey from Canada in 1987 she noticed that the colors of nature in New Jersey were unbelievably beautiful and decided to photograph them. She also took an interest in Amish quilts and decided to try to recreate the patterns and colors typical of those quilts by combining her photographs into collages.

Culver, who was born in Liverpool, England, received a bachelor’s degree in graphic design, photography and communications from Manchester Metropolitan University in 1969. She designed publicity material and books for an educational publisher until moving to Canada in 1974. She continued her career as a graphic designer in Canada, working for various departments of the government and several advertising companies for 13 years and establishing her own freelance partnership in Ottawa in 1982. 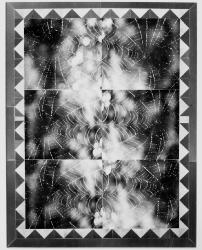 “Charlotte’s Pride” She chose to give it all up when she and her husband moved the family to the United States because her husband was transferred on business. The U.S. government did not allow her to work for profit for several years because shewas herewith her husband, who was issued an exceptionally talented visa while working on renewable energy solutions.While waiting for her own citizenship to be approved, Culver started to experiment with photography.

“Creatingmy handcrafted photo collages became therapeutic for me,” Culver explained. “My first pieces weremade in 1996 as gifts for friends and were based on the colorful geometric designs of Amish quilts.

“In 1998 I began to explore different ways of allowing my collages to take on a third dimension,” she said, “either by including three-dimensional objects and other materials, or by the use of trompe l’oeil (visual deception). I strive to hand-craft works that command attention, draw the viewer in, stirring imagination as well as emotion; unique works that move beyond the photo, becomingmore than the sumof their parts.”

Culver has participated in hundreds of group shows since 1996 and many solo shows. Her latest exhibit, “Getting the Picture,” is currently on display at Brookdale Community College’s Western Monmouth Branch FineArtsGallery in Freehold Township.

“It’s a double entendre,” Culver said of the title of her exhibit. “I got the shot, yes, but getting the big picture, the whole picture, is also what it’s about. I call these works my ‘pretty pleasers.’ It’s a decent overview of work that spans all of what I’ve done.”

In addition, she is currently working part-time as the director of theGuild of Creative Art in Shrewsbury, exhibiting widely, demonstrating her technique in addition to curating, hanging and judging shows. Her photo collages can be found in private collections throughout the United States and Canada, New Zealand and Europe. Her biography has been included in “Who’s Who in American Art” the past two years.

Culver is slated to do another solo display at the Oceanic Library in Rumson in September and hopes to once again be one of the artists on display in the greenhouse during the Sickles Market annual Artist Day in Little Silver.

Wherever her art takes her, she will be happy as long as she continues to create.

“Creative people – artists, writers, musicians – we have to create,” Culver said. “It’s part of our chemical necessity.We need to get into that zone which is our creative outlet. Without that I feel out of sorts. Sometimes it’s a challenge, but it’s a necessity. Ultimately it’s an enjoyment. My hope is to provide resplendent imagery encouraging my audience to see the world as I do, sharing my compassion, my love of nature, the absurd and my attention to infinite detail.”

Brookdale Community College’s WesternMonmouth Branch FineArts Gallery is at 3680 Route 9 south (behind the Bank of America) in Freehold Township. The gallery is open to the public Monday through Thursday, 10 a.m. to 7 p.m. and Friday, 10 a.m. to 4 p.m.