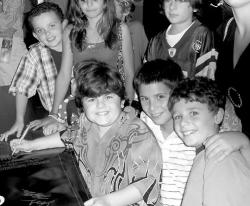 Josh Flitter (center), of Marlboro, one of the stars of the new Disney movie “The Greatest Game Ever Played,” meets some fans at a screening of the movie in Freehold Township. MARLBORO — Hollywood may have found its next child star in Marlboro resident Josh Flitter.

Josh, 11, will be starring along side Shia LeBeouf in the new Disney film “The Greatest Game Ever Played.” The movie, which was directed by actor Bill Paxton, opens this week. The movie tells the true story of a 20-year-old amateur American golfer who qualified for the U.S. Open in 1913. LeBeouf plays the starring role of golfer Frances Ouimet and Josh plays his caddy.

“It was so fun, I got to work with two really great actors,” he said, speaking about LeBeouf and Paxton.

Josh said it has been really interesting to work with some of the biggest names in Hollywood because he gets the chance to see what they are like on and off the screen.

Josh, who attends the Marlboro Middle School, said his best friends still treat him like a regular youngster, but some of his other peers ask him for his autograph and request that he recite lines from his movies.

Carla Flitter, Josh’s mother, described her son’s acting career as “surreal and fulfilling.” Flitter said Josh is becoming one of the elite child actors in Hollywood.

“He’s so professional, he’s so gracious, he’s like a little man,” she said about her son’s demeanor when he works on a movie set. “He’s so real, he’s so grounded.”

“The Greatest Game Ever Played,” which comes out Sept. 30, is not Josh’s first appearance in a film. After starring in about 50 commercials, Josh had the opportunity to work with Jim Carrey and Kate Winslet in “Eternal Sunshine of the Spotless Mind,” and also played a small role in “Duane Hopwood” starring David Schwimmer.

Although Josh’s part in the feature film “Hide and Seek” starring child actress Dakota Fanning and film veteran Robert DeNiro was cut from the movie, Flitter said the two youngsters formed a friendship after working together.

And the hits don’t stop there, Josh’s next film, the sequel to “Big Momma’s House” starring Martin Lawrence, is expected to come out in January. Flitter said her son also has a three-picture deal with Disney, so future roles are just around the corner.

“He’s a great kid with a brilliant mind and a great future,” she added.