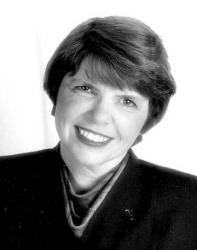 For Suzanne Pease, the answer is obvious.

"What makes NAWBO different? What sets it apart from the other organizations to which we belong? I believe it is a sense of community. If it takes a village to raise a child, it takes a community to grow a business."

That is what Pease, a resident of Marlboro and the owner of Ampersand Graphics, said in her acceptance speech when she became the new president of the National Association of Women Business Owners (NAWBO).

Since July 7, 1975, when the group of women were actually recognized as NAWBO, the association has been recruiting members and striving to achieve its goals.

According to its Internet Web site, the mission of NAWBO is to promote economic development, create innovative and effective changes in business culture, and build strategic alliances, coalitions and affiliations. NAWBO was also established to provide training, contacts and experience to women.

In 1978 the first chapters of the organization were formed. More than 25 years later there are 82 chapters nationwide, including three in New Jersey.

After having sat on the national board of NAWBO for seven consecutive years, Pease was ready to take the highest position in the association that is affiliated with Les Femmes Chefs d’Enterprises Mondiales (World Association of Women Entrepreneurs) which includes women business owners from 43 countries.

While running her business, Ampersand Graphics, in the Morganville section of Marlboro, being a member of the advisory board of AOL-Time Warner, Intuit and Wells Fargo, Pease also man­ages to make time to head up an organiza­tion with more than 8,000 members.

Within NAWBO, Pease has also held the role of vice president of corporate and economic development. As a business professional, she was a delegate for the 1995 White House Conference on Small Business.

She has been the recipient of the Small Business Association’s New Jersey Woman in Business Advocate of the Year award; and the Western Monmouth Chamber of Commerce’s Athena Award and its Circle of Excellence Small Business Award.

Pease has been a business owner and a member of NAWBO for 18 years. A president is elected annually by the mem­bers of the association.

According to Pease, the goals of the as­sociation in previous years were to pro­vide resources to women business owners. Now, she said, "We are concentrating on becoming more active in technology. Our Web site (nawbo.org) is a resource that gives you a more ‘ask the expert’ form of questioning."

"Many corporations are recognizing that women in business is a growing mar­ket and women are being asked to sit on advisory boards for corporations which ask for feedback from small business or­ganizations," Pease said. "I’m excited about being elected but there is also a large responsibility. I have to think twice before talking because I have to have the position of the organization (NAWBO) in mind at all times."

According to the Center of Business Research, privately held firms equally owned by women or men employ nine million workers and generate over $1.17 trillion in sales. There are 6.2 million women business owners nationally; 10.1 million if 50/50 partnerships are counted; and 1 in 11 adult women are en­trepreneurs.

Pease is more than ready to take on this responsibility and expressed her hope that within the next year she can help to "expand the options and opportunities available for America’s diverse commu­nity of women business owners. When women business owners succeed, we all succeed."