Skip to content
FOR LIVING
Folk dancing turns strangers into friends
Besides having fun, the group
hopes to keep knowledge
of the old dances alive
By gloria stravelli
Staff Writer

FOR LIVING
Folk dancing turns strangers into friends
Besides having fun, the group
hopes to keep knowledge
of the old dances alive
By gloria stravelli
Staff Writer 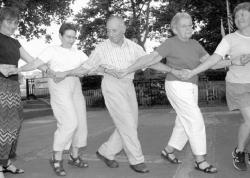 Wander over to Marine Park in Red Bank on any Tuesday evening this summer and you may get in on a conversation about culture and tradition and kinship.

It’s a dialogue that takes place without words, in an international language spoken through dance.

"International folk dance patterns are the same. It’s a universal language — dance and music," explained Kathi Batsis, a member of the Monmouth Folk Dancers, whose members meet weekly throughout the summer to dance on a faded shuffleboard court in view of the Navesink.

"It’s a language we all speak," agreed Gloria Gross. "There is folk dancing all over the United States, and we give to each other. It’s a common language." 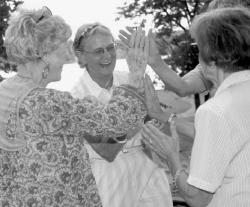 Based at the United Methodist Church on Broad Street for the rest of the year, the Monmouth Folk Dancers will celebrate its 50th anniversary in the fall.

Members acknowledge that there’s more to the weekly get-togethers than learning the intricacies of dances with unfamiliar names like Juego (Romanian) and Goscie Jadz ( Polish).

"I was dragged to the beginners’ group by a friend 20 years ago. I was divorced and didn’t want to date or do the bar scene," explained Gloria Gross of Lincroft. "I found a wonderful support group. And I met my husband here. There have been so many folk-dance marriages, we kid about it,"

"I met a man who danced here for 10 years, a happy bachelor who I met and married," said Egle Tschinkel, Holmdel.

"You can do folk dance as a single, so singles come. It’s very social, very friendly. We all dance with ourselves and with each other. It’s a very easy camaraderie."

After a hiatus of a few years, the folk dancers decided to return to Marine Park and happily took the borough up on its offer of the shuffleboard court since the location provides lights and electricity for the tape player.

Sometimes, young people hanging out in the park help the dancers set up their gear and some give in to the impulse to join in.

"The kids in the park help us set up and sometimes they dance with us," Gross said.

Folk dance sessions begin at 7:30 p.m., a time set aside for teaching children, if any show up. The 8-9 p.m. slot is focused on beginners, and dances are kept simple. After 9 p.m. the serious dancing starts.

"We dance until 10:30 p.m. After 9 p.m., it’s usually just request dancing," Gross explained. "There’s a chalkboard, and we write on it what we want to do. It’s how we learn more advanced dances."

While the group has plenty of long-time members like Carl Goldschmidt, who joined 41 years ago and is now a teacher emeritus, it also has room for neophytes.

"I was walking through the park and I figured I’d learn some new dances," said Timothy Nicoletti, Red Bank. "I like it, it’s fun and I’m coming back next week. I like to mix up the people I socialize with. I have many young friends and I find older people to be very interesting."

That’s exactly the strategy behind dancing in the park, according to Charles Gross.

"There are five or six people here tonight we haven’t seen before," he noted "That’s the point, the reason we’re here in the park. This is what we want more than anything."

Occasionally, guest teachers come for a session, and dances and cultures are introduced and exchanged.

"This year we had a couple from Bulgaria. One year an Israeli youth group danced for us," said Charlie Gross.

"The music is what we have in common, added Gross, "folk dances, set dances, square dances, line dances. We try to mix it up so anybody who comes on any week will find something and be able to dance."

"A friend told me there’s folk dancing up in Red Bank, and that’s how I joined the group," explained Batsis, Toms River.

To Batsis, who volunteers to teach the beginners’ dances, there’s an elemental difference between Western-style square dance and international folk dance.

"I think it’s the music. The difference is that in square dancing, the caller tells you when to start to dance, but in folk dancing the music tells you what to do. Your body responds to the music."

The group’s openness is what attracted Dr. Robert Feldman, Fair Haven, 18 years ago.

During a typical session, one or another of the folk dancers is apt to step up and lead the group in learning the steps of a new dance.

"There are a lot of basic steps, and that’s what beginners learn. We also learn the style of each country," Gross explained. "For instance, Israeli folk dancing is very loose and flowing, as opposed to English and Irish dancing, which is very stiff."

Collectively, members know hundreds of folk dances, and part of their mission is to keep knowledge of the old dances alive.

"We try not to lose our old dances," noted Gloria Gross. "You always want to do something new, but there are hundreds of dances and you forget some. So every once in a while, we say, ‘We need to remember that dance.’ Someone remembers a part of it and they lead. Whatever member is best at it will lead. That’s how it was done in the villages."

"Everybody remembers different pieces. It’s a team effort," said Andy Montano, an experienced teacher who is new to Monmouth Folk Dancers this year. "Age doesn’t matter, not at all. I’ve taught groups of Girl Scouts and a group with dancers in their 90s.

"There’s enough different to make it interesting, but there are common dances, too," continued the Manahawkin resident. "You can walk up to a group of strangers, put your hands out and start dancing. If you come as a stranger, you will have friends by the time the session is over."