A town’s history as seen
through the camera’s eye 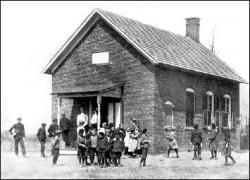 The Morristown School, pictured in 1906, still stands on School House Road but is in danger of collapsing. The building, which replaced an earlier building that burned down in 1897, was expanded in 1917 and was used for classes until 1948.

It’s not hard to imagine the joy that thousands of northern New Jersey families would experience each summer when after a long drive, they reached the dirt road leading from Route 35 in what is now Old Bridge to Seidler’s Beach, located between the Laurence Harbor and Cliffwood Beach sections of the township.

With its large hotels and bathing houses and its abundance of sun and calm waves from the Raritan Bay, Seidler’s Beach at one time represented the Jersey Shore to many from the north and the west.

Of course, its popularity would wane with the advent of the Garden State Parkway and the other highways that allowed easier access to beaches farther south along the Atlantic Ocean. Crowds eventually disappeared, and hurricanes took their toll on many of the older buildings and the boardwalks along the Raritan.

However, images of the former resort and its neighboring beaches can now be seen in Old Bridge, compiled and written by Laurence Harbor resident Michael J. Launay and published recently by Arcadia as part of its well-known "Images of America" series. 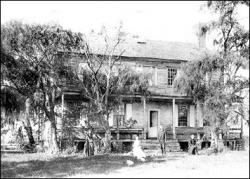 PHOTOS COURTESY OF IMAGES OF AMERICA: OLD BRIDGE, ARCADIA PUBLISHING The Bowne mansion stood on a bluff in Cliffwood Beach overlooking the Raritan Bay. The Bowne family lived in the home until the mid-1800s.

While Launay points out that the chapter titled "Fun and Relaxation," showing Old Bridge as a Shore resort, might grab the attention of many readers, the book also has no shortage of photographs that tell the stories of Old Bridge’s past in farming, industry, religion, education and family.

The book — which doesn’t differentiate between time periods when Old Bridge was called Madison Township or whether the images are from hamlets known as Browntown, Herbertsville, Morristown and so on — has extensive depictions of the older and more notable buildings in the community.

Examples include the Browntown Post Office and Town Hall building on Route 516 near Route 9, now an electronics store, which is pictured around the turn of the 20th century. The Warne Store house, which still stands at Route 516 and Morganville Road, is pictured when it actually was a store in the late 1800s.

There are also the Runyan Coal Yards off Browntown Avenue, the old Cheesequake Hotel and even a picture of the Kepec Chemical Co. — the site where the Rosenbergs allegedly contacted Russian spies in 1950.

And from the area’s first school, the Morristown School, to one of its oldest houses of worship, the Cheesequake Baptist Church, it becomes clear in Old Bridge that religion and education have always been prominently regarded.

The book, according to Launay, took approximately one year to research — a major undertaking for its author considering he was doing it free of charge and in his spare time away from his job with the Essex County Improvement Authority. Proceeds from its sale, he said, will benefit the Madison Township Historical Society, of which he is a member.

Launay, who also maintains a Web site called "New Jersey’s History’s Mysteries," located at www.njhm.com, said he is hopeful that there will eventually be a second edition of Old Bridge.

A home at Route 34 near Cottrell Road

"There might be," he said. "I’m hoping that when people get the book, they’ll start to dig out some of their own older photos and share them with us."