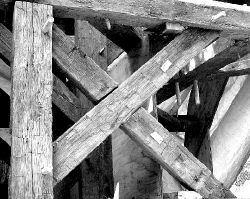 A closeup shows original wooden beams from the St. Peter’s Episcopal Church steeple. The church, a landmark at the corner of Throckmorton and West Main streets, Freehold Borough, will celebrate its 300th anniversary in 2002.

Additional state grant money means St. Peter’s Episcopal Church in Freehold not only can preserve its historic past in style, it also will be able to continue serving the community as a whole in the future.

"St. Peter’s has always been known for serving the community in many ways," Hebert said. "Through the restoration of the church, we hope to continue to do so long into the future."

Church officials recently learned St. Peter’s will receive an additional $139,784 from the New Jersey Historic Trust Fund for the restoration of the church’s steeple and roof, according to Bruce Edmunds, who chairs the church’s Building Restoration Committee. 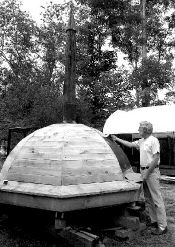 PHOTOS BY JERRY WOLKOWITZ Ira B. Matthews Jr. removes a protective covering from a section of the St. Peter’s Episcopal Church steeple prior to continuing restoration work on the historic piece.

In early 1998, St. Peter’s received a grant of $313,012 from the state fund to help it continue with the restoration of the church.

"We discovered that we would not have enough money to complete the necessary work on the steeple so we applied for additional grant money," Edmunds said.

Hebert pointed out that the church must raise matching funds in order to be eligible for the state grant.

"We have raised more than $400,000 ourselves for the restoration project," the pastor said. 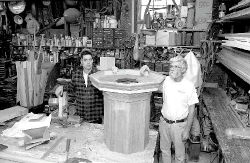 Ira B. Matthews III (l) and his father, Ira B. Matthews Jr., prepare to work on a portion of the St. Peter’s Episcopal Church steeple. The steeple is expected to be returned to the church in Freehold Borough later this year.

There is perhaps no more significant landmark symbolizing the history of the borough than St. Peter’s on the corner of West Main and Throckmorton streets. The church’s rectory is on the National Register of Historic Places, selected for that status because of its link to the beginning of the nation.

However, the church has meant much more to the entire community of Freehold than its religious functions, Hebert said.

"I think that is why we were selected for the grant in the first place," he said, "and I think that weighed heavily in the decision to give us additional money. I think the board of the New Jersey Historic Trust was impressed that not only were we preserving an historic building, but that the restorations ensure that we will be able to continue serving the community in many ways in the future. We are also very proud that we received an honorable mention award from the Monmouth County Planning Board for the restoration and historic preservation of a Colonial church originally built in 1771 by architect Robert Smith."

Among the many community programs in which the church is involved are its after-school program, its thrift shop on Throckmorton Street and its support of such nonprofit organizations as the Open Door food pantry, Hebert said.

"We also provide a free supper for the needy three Fridays a month," Hebert said. "We hope to be able to increase that to four Fridays a month in the future."

The church’s humanitarian contributions go back to Colonial days, according to historians.

The church is believed to have been used as a hospital when the Battle of Monmouth was fought near Freehold on June 28, 1778, when the building was little more than a shed.

"St. Peter’s is the oldest public building that has been in continuing use in Freehold," Hebert said.

The congregation’s first service was held on Oct. 10, 1702, led by the Rev. George Keith in the Quaker Meeting House at Topanemus, a site near the current village of Marlboro.

In 1736, the congregation received its charter from Britain’s King George II. The current church property in Freehold Borough was purchased from James Robinson in 1738.

The frame of the new church, designed by Colonial builder-architect Robert Smith, was erected in 1771, but it remained an empty shell until the end of the Revolutionary War.

The original building on its current site was completed between 1792 and 1806. Major interior changes were made to the church in 1837 when it was in a severe state of deterioration. Various repairs and improvements have been made to the church’s buildings over the years.

Cracked timbers found in the ceiling triggered the latest project to upgrade the church, according to church officials.

The latest grant money will be used to complete the restoration of the church’s steeple, which is undergoing framing and other work by Ira B. Matthews Jr., a restoration contractor.

"This is one of the very few surviving steeples from the 18th century," Hebert said.

Matthews said the steeple should be completed and replaced on the church by early November.

"Everything is going according to schedule," Hebert said. "All of the restorations will be completed for our 300th anniversary in 2002."