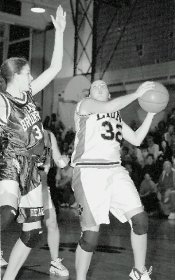 "We came back with only one starter from last year; we only have three seniors on the team. We’re very, very young," Jones said of this year’s Shore Conference A North champions. "I’m very proud of the kids; we had one heck of a season."

A season that was closer to continuing than the score might indicate. The Lions stayed with the Bears through most of the first half, even taking a 23-22 lead midway through the second quarter when Jen Daly drove the lane for a basket before the Bears went on a 10-2 run to go into the locker room with a 35-25 halftime lead.

The Lions seemed to have regrouped at the break and cut the lead to 37-33 when Daly took a pass from Kelli Nadeau with about five minutes remaining in the period.

East Brunswick’s Jess Olszewski scored on a drive to the basket with three seconds left in the period to give the Bears a 48-40 lead.

The Lions were able to keep the margin at eight (52-44) through the first two minutes of the final quarter, but a tiring North squad was unable to withstand the relentless pressure, and East Brunswick started getting easy baskets off turnovers.

"That’s just another level of play," Jones said of East Brunswick. "That’s a program that’s been in the top 20 in the state year after year since Reggie (Carney, East Brunswick’s coach) has been there. We played with them for a little while; it’s just the experience they have playing at this level got to us more than anything else.

"We haven’t been to the semifinals in 10 years and they’re used to this time of year," Jones added. "You can see the difference in the experience level." 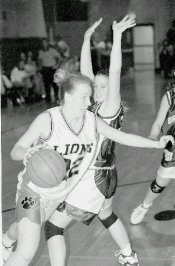 The Lions’ experience level will take a large hit with the departure of Daly, the aforementioned lone starter from a year ago. She delivered a typically impressive performance in her final game, scoring 15 points and playing a big role in helping the Lions break the Bears’ press.

"Jen’s a very good ball player who brings a lot to the team," Jones noted. "We’re not going to be able to have one girl step up and give us what she did, but I have three or four girls together who can do that."

Daly was far from a one-woman show this season.

Against East Brunswick, fellow senior Jenn Smith was singled out by the coach for doing a good job on limiting Jess Olszewski’s opportunities. The East Brunswick senior is an all-state caliber player and the school’s all-time leading scorer with more than 1,400 points.

While the loss of Smith and Daly, along with fellow senior Angela Lanose, is significant, the good news is that everybody else, including point guard Jamie Fumundo, returns.

"She played a very good game today, handling the ball against the press," Jones said. "She’s only a sophomore and hadn’t played point guard before this year. She had a real fine year and I think she’s going to be a very good ballplayer for the next two years."

Fumundo finished with seven points and five rebounds against the Bears.

Nadeau, another key underclassman, added six points and eight rebounds for the Lions, who finished the year 18-7.