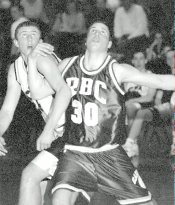 Joe Cavanaugh of Red Bank Catholic gets tied up with Christian Brothers Academy’s Eric Hazard while fighting for a rebound in the the South Jersey Parochial A final.

LAKEWOOD — Even with Tuesday’s loss to Christian Brothers Academy in the South Jersey Parochial A final, the Red Bank Catholic boys basketball team had a year to remember.

"I’m very proud of my kids," RBC Coach Mike Beerst said. "We tied the school record for wins, we won C South and got here to the finals, beating a good Holy Spirit team."

While the Caseys do have plenty to smile about, Tuesday’s game against the Colts was a hard way to end the season.

"I think they’re just awesome because they have everything," Beerst said. "If you take their inside game away they go outside and hit a three. Go outside and defend and they come inside and hurt you there." 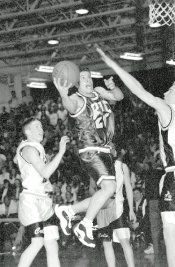 Santo Siciliano of Red Bank Catholic drives to the basket Tuesday against Christian Brothers Academy in the the South Jersey Parochial A final.

For their part, the Caseys had some trouble getting things going early, as shots simply would not fall.

By the time the Caseys got on track the game was out of hand.

Still, there was one bright spot as senior Justin Tardio scored 21 points and finished with more than 1,000 for his career.

"I’ve got a lot of young guys," Beerst noted, "but I also wanted Tardio and Cavanaugh and Siciliano — who worked so hard to get to this level — to be out there too."

"We were very fortunate to win a lot of the games that we did, but my kids had a lot of heart all year long," Beerst said.

He noted that while his seniors provided a foundation for this year’s team, he will be able to build on three quality underclassmen who developed this year.

Sophomore Mark McGraw and juniors Jeff Hemschoot and Jared Gaudet undoubtedly learned some important lessons this season, including how to bounce back from a disappointing loss.

The Caseys’ 18-game winning streak came to an end when they were upset in the first round of the Shore Conference Tournament by Brick Memorial.

Rather than be put into the tailspin by that loss, the Caseys came right back and beat a quality Middletown South team and then beat Notre Dame and Holy Spirit to reach the final against CBA.